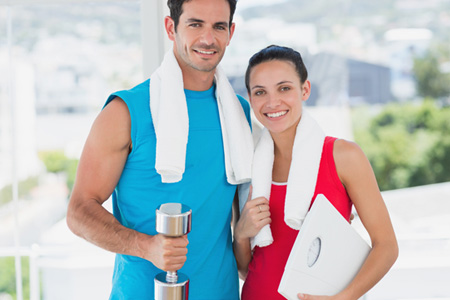 When it comes to weight-loss, men really DO have the edge.

Some of the MANy reasons

Women require less calories daily than men. They can blame their female hormones for making it easier for their bodies to convert food into fat, than men’s. Men naturally have a higher metabolism than women, which means that their bodies are able to burn fat as energy faster.

Men are also naturally more muscular due to the male hormone testosterone, which decreases the amount of fat stored and increases their ability to break down fat as an energy source.

And as if that’s not enough, with the advantage of having extra muscle mass, men burn more calories and get stronger bones. This prevents osteoporosis which unfortunately hits many women later on in life.

But it’s not all easy for men to stomach

When men gain unhealthy weight it gets stored predominately around their stomach area, which puts them at higher risk of developing heart disease. Women generally carry unhealthy stored fat on their hips and thighs – which are ‘better’ areas in terms of health.

The ladies were right all along. Men have the upper hand in the weight-loss war against women. Their bodies are simply designed to break down fat faster than women’s.

In order to lose weight, men need different supplements, diet plans and workouts than women. They need to add extra protein to their diet in order to increase their muscle mass, which will increase their metabolism and make them burn more calories faster.

Our Herbex Men’s range has a higher amount of green tea extract and other herbal ingredients than our female weight-loss products. This encourages optimal weight-loss, giving men yet another advantage… But don’t tell the ladies!

Want a Flat Belly? Eat THIS for Breakfast!

10 Reasons Why You’re Not Losing Weight